Having written about the Wapping Tunnel, it seems appropriate to mention the station of the same name. As with its extant counterpart at Liverpool Road, Manchester, it dates to 1830 but is much less well understood. As ever, a work-in-progress. Fig: The tunnel portal in 1831 as viewed from beneath the warehouse situated over the cutting. The height of the cutting (and hence columns) is somewhat exaggerated. Artist: Thomas Talbot Bury.

The original intention had been for the Liverpool & Manchester Railway (L&RM) to enter Liverpool to the north but the failure of the 1825 Bill led to a rethink and adoption of a more southerly route, largely to mollify influential landowners. Locomotives were not permitted on the streets of Liverpool and the solution was to site a passenger station at Crown Street just outside the boundary. Even so, locomotives did not enter the station but instead trains were hauled into the station by rope connected to a stationary engine in the Moorish Arch at Edge Hill.

Goods trains also shed their locomotives at the Edge Hill Cavendish (now Chatsworth Street) cutting and ran by gravity down to Wapping Station, close to the Queens and Kings Docks but separated from them by the dock road, Wapping at this point and hence the name of the station. Wapping Dock itself, as we shall see, was a later addition.

The station was also bounded to the east by Park Lane (a later name for the station), to the north by Sparling Street and to the south by Crosbie Street, infamous for its crowded court housing. Over time the station would be extended to Blundell Street. 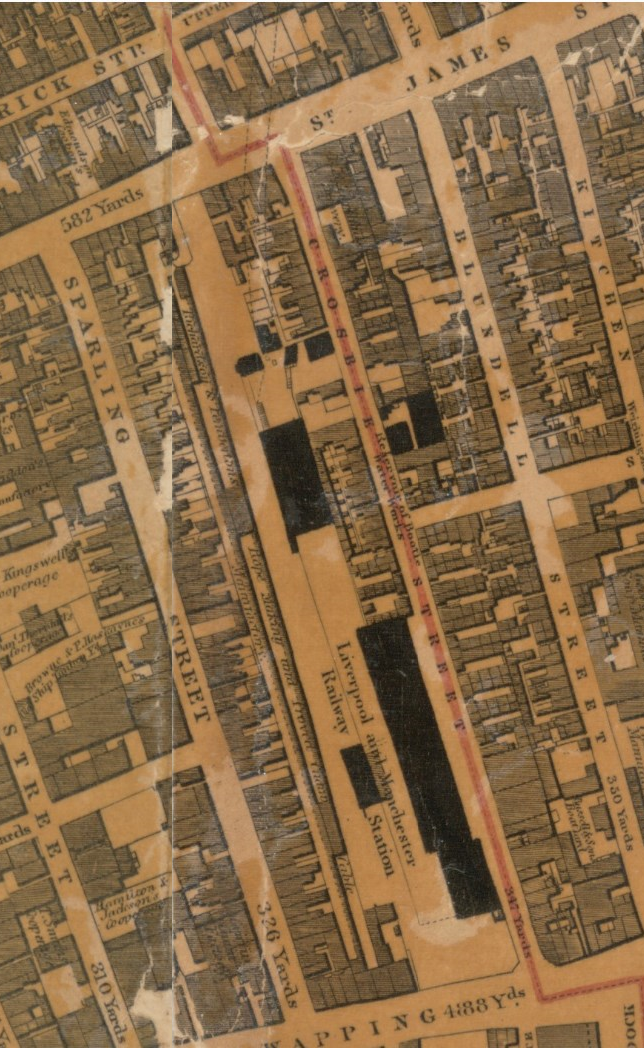 Fig: Detail from Gage's 1836 map. The station cutting runs down the centre with the 1830 warehouse roughly in the middle. Three small buildings just above it are clustered around the tunnel entrance where small rectangles represent weighing machines on both the up and down line. The long range of warehouses to the right (south) was likely absent on opening in 1830. The building opposite is the Up Goods Office.

The station was sited on a former ropery and indeed one continued in operation immediately to the north. The linear site sloping down to the docks obviously suited sidings although the incline required that the track run into a cutting. The restricted width of the site favoured location of the warehouse above the cutting although this meant that north-south movement on foot was awkward and required staircases on either side of the cutting.

Fig: Looking east towards the 1830 warehouse across the cutting and tunnel portal beyond. The building on the left is the reimagined Up Goods Office.

Opening and operation of the station

The Manchester 1830 warehouse was a late addition and only completed shortly before the railway opened in September 1830 although the routine goods service only began in early 1831 due to a shortage of suitable locomotives. The late start was due to the L&MR directors changing their views on the need to provide warehousing at the station rather than requiring rapid collection of goods. It is likely that the warehouse was built at roughly the same time as the one in Manchester. The latter was designed by Haigh & Franklin and built, like the Manchester passenger station, by David Backhouse Jnr. The architect of the Liverpool building is unknown. As with the Manchester building it may have been timber-framed given the requirement for a rapid build. Fig: Looking west from the tunnel portal with the 1830 warehouse in the centre. Note that passenger coaches were not normally found at the goods station but did run down there on the opening day.

Trains ran down the Wapping tunnel under gravity with additional braking from pilot wagons and ultimately a slight incline in the yard at Wapping. The train was brought to rest under the warehouse and wagons unloaded directly into the warehouse by hoist and trapdoor. Bulk goods such as coal and lime were unloaded on the quays (as the sides of the cutting were called) beyond the warehouse. Movement of wagons was either by man-handling or by horses with much use of turnplates in the limited space available.

There was a need for additional storage of wagons and this took place to some extent by means of a tunnel through the north side of the cutting between the portal and warehouse. This facility was later removed and a cutting inserted in its place, access to the warehouse then being via a bridge.

Although the Wapping gate was primarily intended for access of goods coming from the docks, I suspect some bulk goods exited there as well. Goods stored in the warehouse were notified and collected via the Park Lane entrance. The house above the cutting at that end may have monitored access as well as housing controls for the weighing machines on the ground floor in the cutting. The Park Lane entrance was also used for channeling live pigs down to wagons for shipping to Manchester.

However, up goods destined for Manchester mainly entered via the Wapping gate and hence there was a requirement for a goods office there which has been reimagined in the OpenSim build. Wagons would be marshalled and loaded on the north quay and pulled by horses up to the start of the continuous rope haulage system some 30 yards inside the tunnel. Initially the system was limited to rakes of five wagons so further marshalling was required at Edge Hill (goods trains were typically about 10 wagons long). To avoid contact with the warehouse floor or roof of the tunnel a loading gauge was provided at Wapping, the first known.

The role of the building on Crosbie Street is unclear but presumably there was also staff-only access from there.

As can be seen on Gage's map, by 1836 there were multiple warehouses running down Crosbie Street. The one nearest Wapping may have been designed by Franklin for the Bolton & Leigh Railway operated by Hargreaves.

The station subsequently expanded into the former ropery with a second cutting introduced as well as a tunnel connecting the two. Ultimately there would be four tunnel entrances into the station with access controlled by a signal box in a small cutting ("the Crow's Foot"). Fig: This 1865 panorama shows a second uncovered cutting north of the original. The 1830 warehouse now has an extension and the range of warehouses down Crosbie Street is also visible. By this time the Wapping Dock and warehouse (roof just visible at bottom) were operational.

In due course the company bought a yard nearer to the docks and the railway track extended across Wapping to the yard which ultimately reached the dockside and was used both for stabling of wagons and delivery of coal to the ships. This area would ultimately become part of Wapping Dock with the railway forking in either direction to connect with the line running along the docks and in the case of Wapping into the warehouse itself.

Finally the station outgrew the limitations of the original block and was extended across Crosbie Street as far as Blundell Street. Fig: Park Lane station from the west c1927. The original warehouse can be seen in the centre with a small extension to the west. It appears contiguous (and was probably continuous via doors above ground level) with another later warehouse.

The docks area was badly damaged as a result of bombing in the Park Lane and Wapping area during World War 2. One land mine in particular knocked out the overhead and docks railways at Wapping, including the junction for the (by then) Park Lane Goods Station. The Wapping warehouse was affected and as a result is now truncated and there was also damage to the adjacent goods station. Part of this is now a car park but the remnants of the station canopy above it are post-war. The 1830 warehouse clearly survived into the 1920s as it appears on photographs of that era. Its fate thereafter is unclear and its significance perhaps unrecognised.

As the need to handle larger ships became paramount, so shipping moved to less central docks served by other goods stations. Accordingly, both tunnel and station at Wapping closed in 1965 with the station being demolished over a period of time.

Although the photographic record of the station is limited, there are good accounts of its layout, both as an 1890 fire insurance map and as detailed plans in Lancashire Archives. As the contemporary of the 1830 station at Manchester, it merits both a place in history as well as further study. 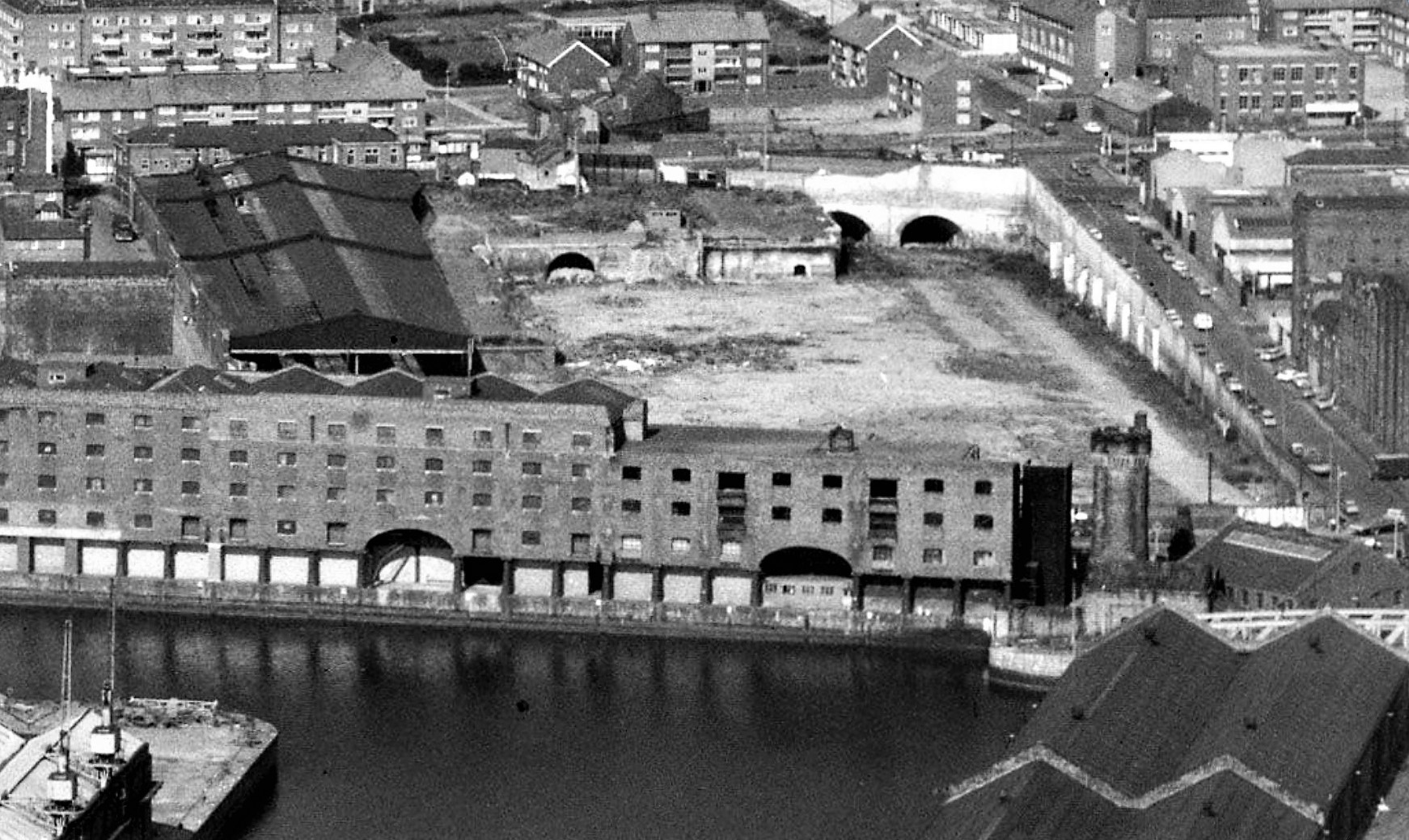 Fig: Remains of the largely demolished Park Lane Station (as it became from 1921) with Wapping warehouse showing evidence of WW2 bomb damage.