The Intersection Bridge was the first bridge to carry one railway, the St Helens & Runcorn Gap (SH&RGR), over another, the better known Liverpool & Manchester (L&MR). It was situated on the Sutton inclined plane not far from St Helens Junction. Although the bridge persisted for a good many years after the line closed, it was much modified and what we know of it derives mostly from an aquatint prepared by SG Hughes and published in 1832. 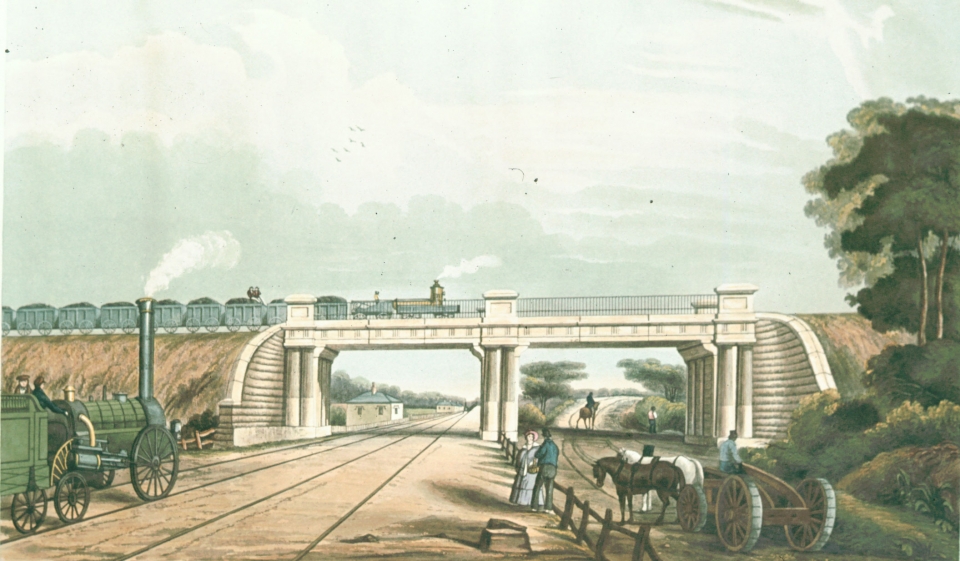 Fig: View of the iron Intersection Bridge looking east down the Sutton inclined plane towards St Helens Junction and Manchester beyond. The print is dedicated to brewer Edward Greenall, father of Peter who was also a supporter of the SH&RGR.

What the picture tells us

The image (zoomable versions) is interesting for a number of reasons. Firstly, the artist is unknown but is presumably Thomas Talbot Bury who produced a popular series of coloured views of the L&MR published by Rudolph Ackermann. Why he is unattributed here is unclear. He did, however, produce a revised series of L&MR prints in 1833 so likely was available for this commission. However, it is worth noting that the SH&RGR did not open until February 1833 so whether the embankment and bridge were complete and coal being hauled routinely may be doubtful. However, one coal train apparently did run in November 1832 to win a wager that the line would be operable before the year's end; perhaps that event is recorded here although the lush foliage suggests otherwise. The line was supposed to take coal from the collieries around St Helens to the Mersey around Runcorn Gap, modern-day Widnes but the dock was not finished by the time the railway opened in February 1833 and only completed some six months later.

It follows that the interpretation given below is even more conjectural than usual. It may represent circumstances that pertained for a short time or not at all.

The bridge was designed by Charles Blacker Vignoles who produced the survey for the Rennies that underpinned the enabling legislation for the L&MR passed by Parliament in 1826. He subsequently resigned from the L&MR after being blamed by George Stephenson for an error in the survey for the Wapping tunnel.

As with the L&MR Water Street bridge, the structure was made of iron. It appears to have had some architectural aspirations (perhaps a riposte by Vignoles to the L&MR) with Doric pillars, pilasters and triglyphs although, as an architecture student, Bury may have accentuated them to a degree. The bridge appears to have been widened and modified over time and I am not aware of any other records of its original appearance.

The picture shows three people beside the railway, a man and woman plausibly waiting for the train in the distance and a man on a cart in Leach Lane (which leads through to Penlake Lane beyond). Although it could be waiting to take on passengers in transit, the cart does not appear to be especially suited to the purpose and it seems more likely that it is waiting to collect goods, perhaps empty milk churns or similar.

In front of the couple is a broken stone sleeper of the kind used to support the rails (the sleepers were buried so are not normally visible). On embankments, however, wood sleepers were used. Both the SH&RGR and L&MR used standard gauge. This sounds trivial with hindsight but, of course, enabled growth of a network.

By 1832 the L&MR was operating mixed use second class trains so it is not unlikely that the well-dressed prospective passenger is waiting to board the same train, the man attending her being an L&MR employee, perhaps a policemen who will flag the train down (no signals are visible).

The policeman may have been based in the cottage just beyond the bridge on the left. It clearly has access onto the track and the drop-ended hood mouldings are typical of L&MR buildings at this time. This area was known as Toad Leach, later Sutton Leach, and it is possible that the station is the one known as Sutton in early schedules. This is normally ascribed to the station now known as Lea Green (also termed Top of Sutton Incline) but it is possible that the stopping-place swapped between the two locations for a time.

The rationale for this may have been the development of passenger traffic on the otherwise mainly mineral-oriented SH&RGR. The latter is known to have purchased two coaches from the L&MR that were ordinarily attached to the end of coal trains. The notion that there was an interchange at the bridge is supported by an account by George Head of a journey along the SH&RGR from St Helens to Runcorn Gap.

George Head's experience of the SH&RGR

Head travelled from Liverpool to St Helens, alighting at St Helens Junction (which can be seen in the distance on the left of the track) and then taking a horse-drawn wagon along the branchline to the centre of St Helens. The same conveyance later took him on the SH&RGR mainline and over the Intersection Bridge where it dropped him on the embankment before going back to collect passengers from Liverpool and Manchester, possibly from Sutton station (if the station persisted and there was a staircase to the embankment) or all the way from St Helens Junction, a round-trip of approx. 2 km.

The ascent of the embankment involved an inclined plane either side of the bridge. An 1849 map suggests the engine house was south of the bridge, not far from Leach House. It powered a continuous rope haulage system although the descent was conducted under gravity. Head goes into some detail as to how the operation was managed. Ultimately, when the L&MR passengers had joined those waiting, they entered two new carriages, half-closed, half-open, attached to a coal train hauled by a locomotive and then descended the inclined plane towards Runcorn Gap, the whole journey of 8 miles taking three hours and costing 6d and 9d for the two stages either side of the bridge.

The locomotive on the bridge is presumably either William IV or Queen Adelaide, developed from Braithwaite and Ericsson's Novelty which competed at the Rainhill Trials in 1829. Novelty is supposed to have been used on the SH&RGR whose engineer, Charles Blacker Vignoles, was a supporter of Novelty at Rainhill (he also designed the Intersection Bridge). William IV and Queen Adelaide were follow-on commissions by the L&MR after Rainhill but arrived too late for use at the opening in 1830 and were generally felt to be under-powered for the luggage trains they were intended to haul. Their ultimate fate is unrecorded but it would not be a surprise if they also spent some time on the SH&RGR. 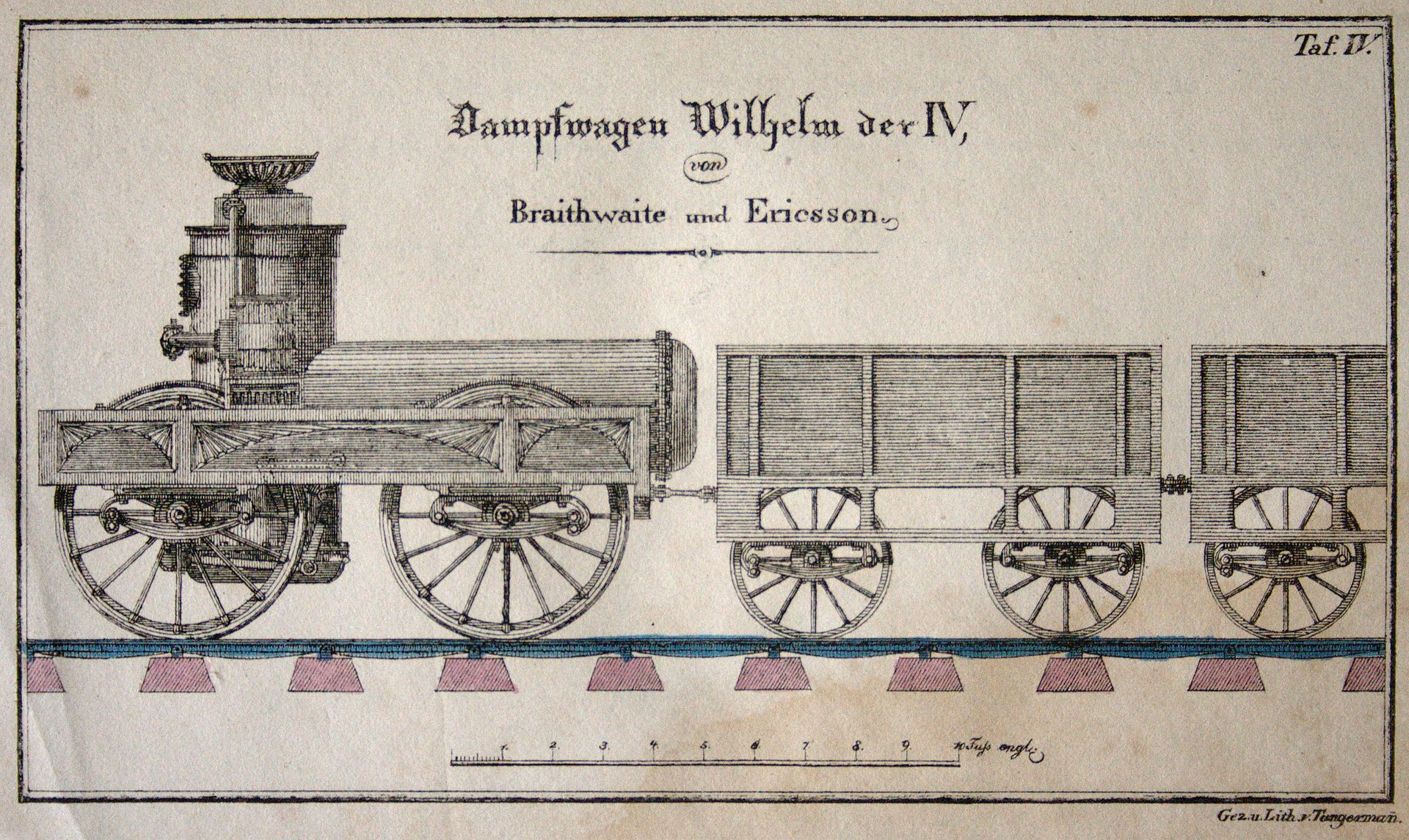 The locomotive on the left is presumably Northumbrian which continued in use until 1836. Although an advance on the other engines used on the opening day, it was rapidly superceded by the Planet class so may have been a one-off design.

This is a rather old scratch build but illustrates the principal features of the location at the time. The cottage in particular needs further work. The engine shown on the bridge is the smaller Novelty rather than William IV or Queen Adelaide in the original picture. 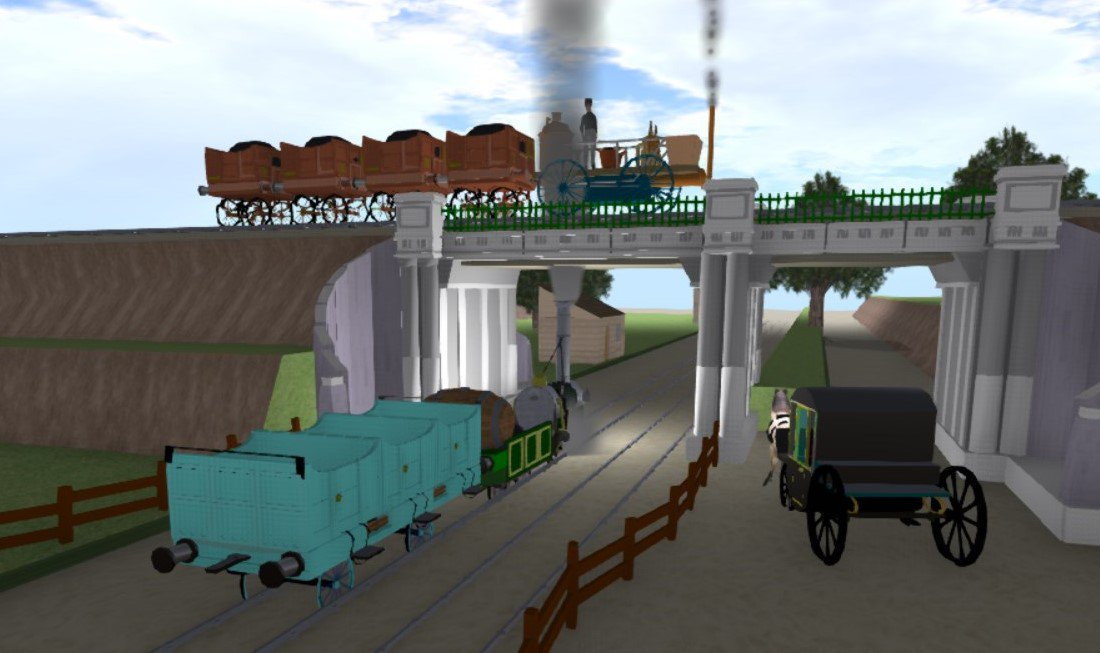 The SH&RGR competed with the Sankey Canal for carrying coal and indeed later merged with them to form the St Helens Canal and Railway Company in 1845.

Although the bridge was dismantled in the 1970s, a footbridge remains. Further details from Sutton Beauty website and the 8D Association