Telford's section and the Wapping Tunnel

I blogged previously about Telford's section of the Liverpool & Manchester Railway (L&MR) but thought it worth considering the Wapping Tunnel in detail. When built it was the first railway tunnel to run under a major metropolis. It took gravity-worked goods trains from Edge Hill down to the station at Wapping on the banks of the Mersey with the reverse journey rope-hauled by a stationary engine in the iconic Moorish Arch at Edge Hill.

As usual, some caveats: I am not an historian, engineer or expert on the Wapping Tunnel; moreover, the build was a very quick hack and mainly shows information already on the chart. Nevertheless, it raises a few questions.

For those looking for insights as to how early railway tunnels were built, I found this video instructive. Fig: Two miles of the Telford section is mapped onto 512 m virtual land. The vertical axis is roughly to scale but the horizontal axis is compressed just over 6-fold. The blue prims represent air holes and the individual red prims the "borings", including eyes from which the tunnel was extended. Most, but possibly not all, were located on the south side of the tunnel as shown. The profile is roughly aligned with the 1836 Gage map.

Construction started in January 1827 and involved the sinking of side-access construction shafts ("eyes") at roughly 60 m intervals followed by 2.4 m square profiled horizontal shafts ("headings"). The final pair of headings met in June 1828 and the finished tunnel was gas-lit and opened to the public for inspection in July the following year. It entered service on the opening day of the railway on 15th September 1830 and closed to traffic in 1965. The current state of the tunnel can be gauged from a recent set of photographs. 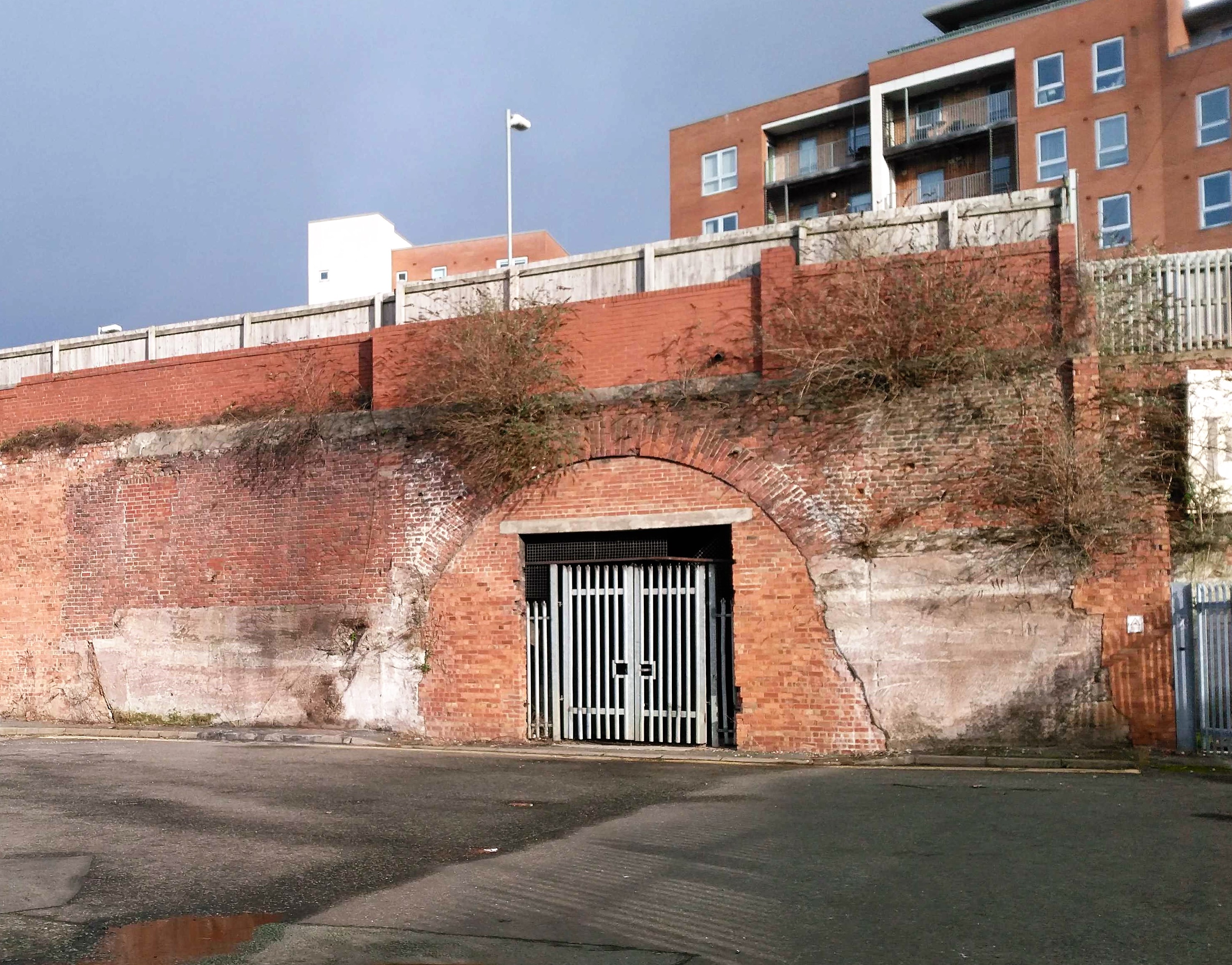 What is a boring?

The build shows borings 1-19 in the form of red-coloured "eyes". It is possible, however, that some of the borings shown on the section were for geological investigation rather than construction and these are rendered semi-transparent in the model. For example, the first boring is in the cutting at Wapping station although it seems unlikely that the tunnel was to continue under that area.

Which borings were used for tunneling?

The section is largely in agreement with the above although it suggests that there may have been additional eyes at Blackburne Place and Smithdown Lane.

The course of the tunnel continues to be marked by ventilation shafts erected in the 1890s to permit working of the tunnel by locomotives. Those at Rathbone Street and Vine Street have been lost but three remain at White Street, Blackburne Place and Crown Street. Fig: Ventilation shafts at White Street, Rathbone Street, Blackburne Place and Crown Street shown outlined in green with the so-called Crow's Foot at the Wapping end of the tunnel in the foreground. Vine/Myrtle St shaft not shown. Photo courtesy of Britian From Above, dated 1949.

By contrast with the borings, there are only nine air holes. My guess is that the main eyes used in construction were sited at borings with adjacent air holes. In some cases, presumably where land access was a limiting factor, the boring and air hole were co-located (e.g. White Delf) but the preference may have been to have them slightly offset where possible (e.g. Millers Close), the assumption being that in the initial stages the air supply from the eye would suffice but that subsequently a through draft was required.

However, Carlson (p.190) appears to suggest that no air flow was available other than between eyes and that the situation became critical for those working underground until such communication was established. This might suggest that the air holes were intended for subsequent routine use of the tunnel rather than during construction.

By contrast, Thomas (p.40) suggests that wooden ventilation ducts provided by the L&MR were extended along the tunnel as work progressed. This seems to imply that some form of forced ventilation was employed, at least at the workface. This suggests possible use of a fan although widespread adoption of such technology was probably still a decade or two in the future. Instead, in coal mines a flow of air was typically generated by means of a furnace at the bottom of an air hole.

The situation with the Wapping Tunnel remains ambiguous although, of course, circumstances may have varied between the sections under the three contractors and at different phases of the project.

The first oddity are the muliple annotations on the section indicating that the tunnel is 15 ft high when most sources quote 16 ft. Telford's assistant may have been erroneously informed by his "minder" (Stephenson was absent) rather than making an incorrect measurement himself.

The section shows that the western end of the tunnel was relatively level and indeed had a gentle upwards gradient into Wapping station, presumably to assist with braking at the end of a gravity run. This section was typically worked by horse or manpower and the western end of the continuous rope (later cable) haulage system was located inside the tunnel at the start of the incline and hence not visible in Bury's print of the Wapping portal.

The section shows a large number of borings at the western end of the tunnel. This may have been in part a consequence of the proximity of the tunnel to the surface in a builtup area. Indeed, there are reports of damage to house foundations in Great George Square by subsidence as a result of tunneling as well as disruption of wells. The section between here and Great George Chapel was completed in mid-May 1828.

As previously blogged, White Delf was a secondary quarry on St James's Mount in the vicinity of Rathbone Street. Curiously there is a separate boring at Rathbone Street but no air hole although a ventilation shaft was subsequently built there in the 1890s. Whether the pre-existing boring was reused is unclear.

Yellow Delf was presumably located at the foot of the original quarry, later St James' Cemetery, which appears somewhat distant from the tunnel but likely extended northwards before the construction of Upper Duke Street. Thomas notes that visitors could access the tunnel works here via a short flight of steps rather than a bucket hoist.

The section suggests that there was both an air hole and an eye at Blackburne Place although the latter is omitted from Thomas's list and hence may have been a later addition opened to accelerate completion of the tunnel. A ventilation shaft is still located there. 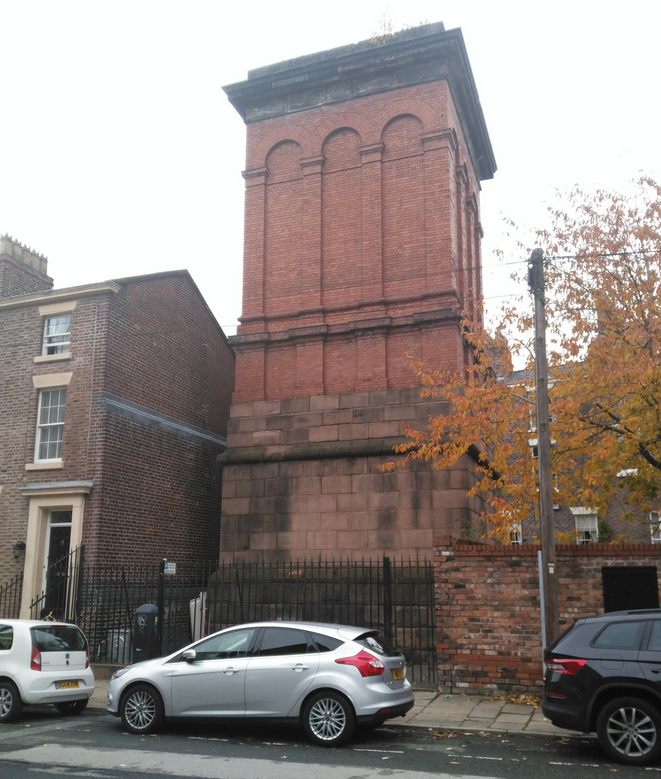 Fig: Blackburne Place ventilation shaft. Was there an eye here as well?

There is an nearby air hole but no eye at the Penitentiary Garden, probably what Thomas refers to as Bedford Street in his list of eyes. A drift here was used to correct the surveying error that led to the resignation of Vignoles and his replacement by Locke. Perhaps the eye post-dated the section on which Telford's was based or it had a very short life. On the other hand, in the absence of an eye the value of an air hole midway along the longest stretch between two eyes would be negligible until the two tunnels met. That said, much work remained to be done before the tunnel came into service although the air hole has not survived.

The length between Vine Street and Crown Street was both long and problematic with flooding and also a tunnel collapse in May 1827 near to Crown Street due to inadequate propping. Nevertheless, junction with the tunnel from Millfield was effected on 26th November 1827. The section does not show any evidence of levelling, presumably as the original was compiled before such work started.

There was an additional air hole and eye at Smithdown Lane, probably roughly where the head shunt now enters Crown Street Park.

There appears to be a pond between Smithdown Lane and the Edge Hill portal although it does not appear on contemporary maps. However, a nearby street is called Water Street.

The section suggests that there may have been a footpath across the railway "under sufferance" east of the tunnel portal at Edge Hill. Whether this corresponds to the Moorish Arch is unclear. The potential of the surrounding fields to yield marl for bricks is also evident. 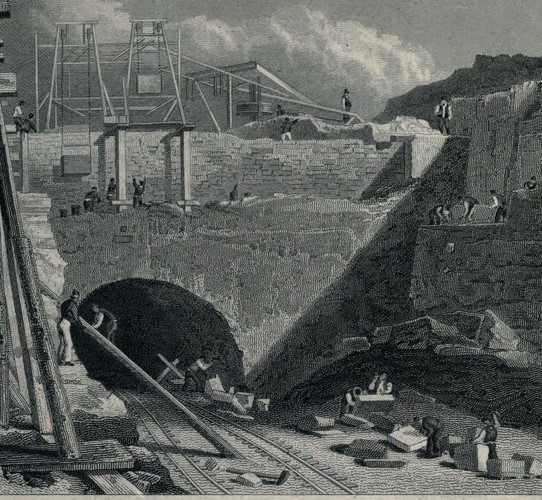 The availability of Telford's section confirms many of the published observations but also raises further questions, notably the possible presence of two additional eyes at Blackburne Place and Smithdown Lane as well as the fate of the various shafts after the tunnel was completed and prior to construction of the five ventilation shafts in the 1890s, three of which continue to the present day.

While the OpenSim build is presently rudimentary, it has been useful in terms of siting the borings and air holes as well as integrating the profile with a reasonably contemporary map (courtesy of TROVE). Although it does not reflect the actual topography, it has potential for further refinement in terms of annotation with images and video.

Thanks to Paul of the Liverpool & Manchester Railway Trust and ICE for access to access to the section. 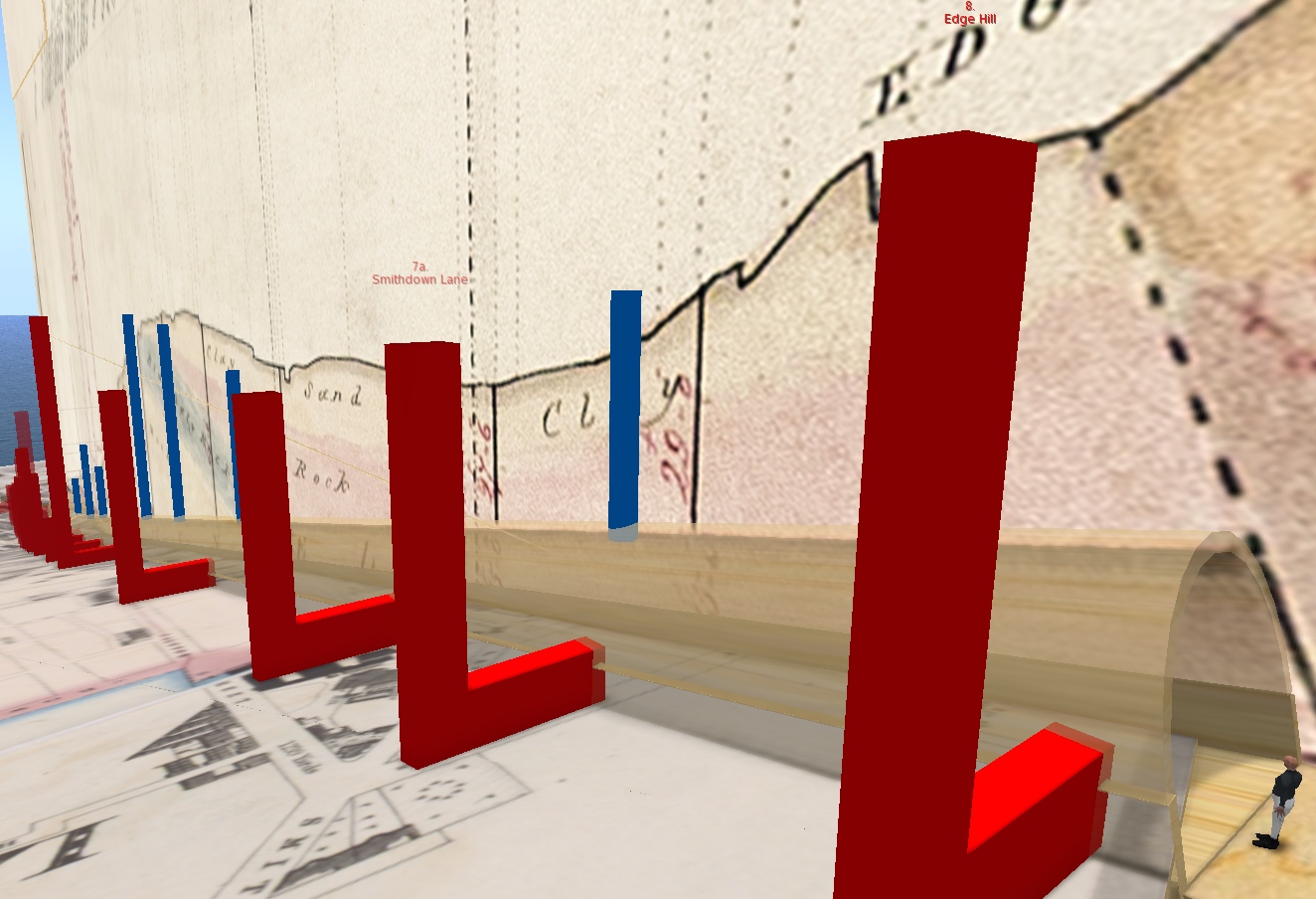 Fig: Looking west from the tunnel portal at Edge Hill.