As usual, much conjecture…

John Whiteside Casson was one of 21 persons listed as architects and surveyors in Gore's 1827 Liverpool Directory. Of these just a few are remembered today, most notably John Foster Jnr. While the Fosters, as borough surveyors, were in a unique position to influence major projects in Liverpool, they could not manage every development in a fast-growing port, let alone the hinterland of country houses and estates. 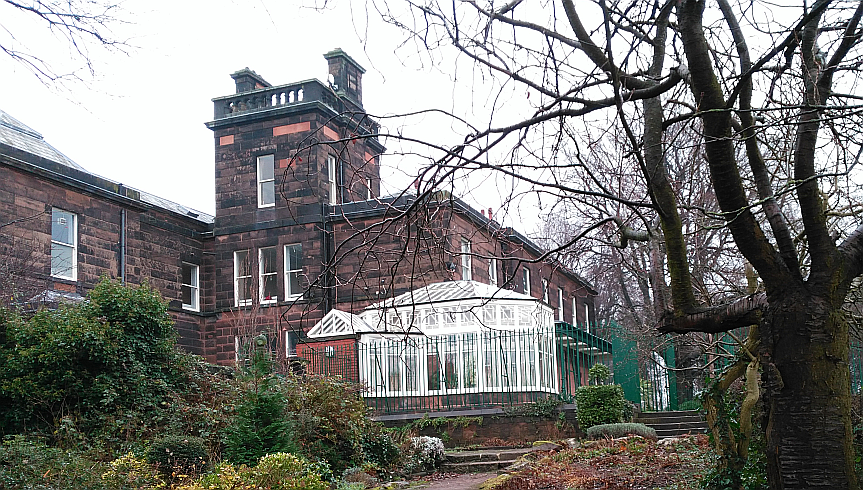 Figure: Sudley House from the west. The station-like block is on the far right with a more recent verandah.

Others such as Casson were indeed active and his work at Sudley House for future mayor Nicholas Robinson bears a marked resemblance to the 1830 railway station at Crown Street. This in turn shares certain motifs with the Manchester terminus at Liverpool Road. Casson may therefore have a unique claim to fame as the architect of the first two purpose-designed railway stations.

And yet, we know almost nothing of him. The authority on such matters, Colvin, has just two sentences on Casson, saying he was active around Liverpool in the 1820s and '30s and crediting him with the 1835 Church of St Thomas & the Holy Rood at Melling. Pevsner adds Gladstone's house on Rodney Street as well as Sudley.

Even post-Google it is hard to assemble more than the basic facts of Casson's life. The following is a best-guess timeline derived from readily accessible sources.

1767 John Whiteside Casson was born on 11th September and baptised in St Peter's on Church Street nine days later. His father was John Casson, a "joyner", generally a key figure in construction projects.

Preliminary guesswork concerning family background (via freereg.org.uk): Occupation (joiner), church (St Peter's) and domicile (Peter Street) are potential connections but a number of different Cassons appear to have attended St Peter's and further study would be needed to clarify their relationships, if any. Little is known for sure but Casson Snr may have lived on Peter Street (now School Lane). His wife presumably had the family name of Whiteside. He may have had another son, Thomas (b. 6th July 1777), who became a coachbuilder. He probably also had a daughter, Molly, born in 1769. A James Casson, also a joiner of Peter Street and possibly another brother or uncle, had a son John on 5th January 1807.

1790 A John Casson marries Ann Roberts, a widow, on 20th November 1790. It is unclear whether this is father, i.e. a second marriage, or son (or, indeed, unrelated). The groom is, however, listed as "Joiner". It seems not unreasonable that an architect should start out as a builder following his father's trade. After all, John Foster Snr became highly successful despite lacking formal qualifications in either architecture or engineering.

1793 A John White Casson is a witness to another wedding, this time of Robert Bradley, bookkeeper, and Hellen Woodward, spinster.

1796 JW Casson is tentatively credited by Pevsner with Gladstone's house on Rodney Street, a prestigious commission and a building that still stands. The basis for the attribution is not mentioned. He also surfaces as a witness to the marriage of another joiner, William Sharrock, and Mary Dutton.

1805 Baptism in St Peter's of a John Casson, son of John and Ann Casson (formerly Stevenson) of Peter Street. Father's occupation: Excise Officer! We have a confusing surfeit of not only Johns but now also Anns. On balance this is probably not the John and Ann in question.

1807 A John Casson of Liverpool is listed as having a recurring subscription to the African Institution, an organisation that attempted to establish a refuge for freed slaves in Sierra Leone. Other Liverpool members included William Roscoe, William Huskisson MP, Bartin Haigh (builder), and David Hodgson and James Cropper, both subsequently directors of the Liverpool & Manchester Railway. Note, however, that there was a contemporaneous John Casson (1743-1814) in Liverpool who was a notable blind organist, composer and educator.

1824/5 A memoir of Nicholas Robinson, the first owner of Sudley, recounts that the architect was "Daddy" Carson, almost certainly Casson whom Pevsner tentatively credits. Gore lists Casson as resident in Great Newton Street (the house number varies) from 1825 to at least 1829.

~1827/8 Building of Liverpool Crown Street station. The precise date is uncertain. The Millfield shaft for the Wapping tunnel dates to Summer 1827 and Locke was using Crown Street as an address as early as March 1827 though whether he was located in the Railway Office, i.e. station, is unclear.

1829 The tunnel to the Chatsworth cutting is finished and Crown Street is no longer isolated though the line is unfinished elsewhere.

1830 Building of Manchester Liverpool Road station, June-August. The necessary legislation to cross the Irwell only came into effect on 14th May. The railway opened in September.

1833 Name on electoral roll. Now living in nearby Gill Street.

1835 Credited with the church of St Thomas at Melling.

1842 Ann Casson dies on 9th May. There is a probate record for Ann Casson of Gill Street (discussed below).

This is Ann's will in which she divides her estate between Frances Ann(e) Keating (wife of broker John Francis Keating) and Ellen Casson, presumably her two daughters who are also to act as Executrices. The will is made on 25th April 1842, just after the death of her husband (who is not mentioned). She herself dies on 9th May 1842, less than one month after her husband. An addendum dated 11th January 1843 asserts that the estate was worth lesss than £100 (£150 was regarded as a decent annual wage around this time). By this time Frances was a widow and had remarried in the name of Owen. Ellen had become Ellen Rankin, wife of upholsterer Richard Rankin and still resident in Gill Street. She had a baby, John Casson Rankin, on 1st September 1843. Clearly the memory of her father was still dear to her.

The estate of John W Casson remains a mystery. Had he made separate provision for his daughters and sons (if any)? Had the family fallen on hard times and been forced to downsize by moving to Gill Street? That might explain his continuing to practice well into his late sixties (the church at Melling was finished when he was ~67). Was it a response to infirmity (moving in with family or to a more suitable house)? In 1843 a new market would open at Dancie Street, taking up the space between Great Newton and Gill Street; might the move have been a response to this development?

There is no record of where either John or Ann might be buried. St Peter's Church closed in 1868 and burials were transferred to Anfield Cemetery.

According to a third-party newspaper advertisement, he was also responsible for rebuilding Higher Hall at Westleigh for John Hodson Kearsley MP.

Casson is mentioned after his death in a legal document, apparently an update on a will, concerning the estate of William Molyneux, sailmaker of St Ann Street who died in 1817, and for whom Casson acted as surveyor.

The rather hazy genealogy above sheds little light on Casson's practice. The notion that he started out as a joiner is not incompatible with becoming an architect and it would be interesting to track back in Gore to see when he is first listed as an architect (presumably sometime before his involvement with Sudley c.1824). Comparing his neighbours in Gill Street and Great Newton Street may give some clue as to whether the family ended in reduced circumstances. For the moment, however, none of the research confirms or denies his supposed role as pioneer railway architect.

The inability to put a name to the architect of the first railway stations has puzzled and irritated a number of authors. By contrast, we know that Jesse Hartley, for example, made significant contributions at Manchester and elsewhere as well as being consulting engineer. Possible explanations include:

My preference is for 5, possibly combined with 4.

Casson's understated contribution in retrospect was to normalise the railway experience, to make it mundane and acceptable to the well-to-do who were its initial target audience. The station was on the periphery of Liverpool and at first sight it didn't need to promote the company any more than its low-key booking office on Dale Street. The company had already opened its doors at Crown Street by allowing paid visits to the tunnels and the Rainhill Trials in 1829 also received a good press. That said, there may have been some second thoughts among the directors and hence Foster's exotic Moorish Arch which presaged a near future when companies would be building "statement" termini in city centres on a cathedral-like scale.

Why might Casson have abandoned his usual customers, the likes of Gladstone, Robinson and Kearsley? One possibility is that the arrival of the railway project made it difficult to conduct business-as-usual given the company's urgent requirement for bricklayers and joiners to develop the estate. Moreover, the services of an experienced architect and surveyor on the company books would be valued at a premium. When the railway was complete Casson may have resumed his previous practice, too advanced in years to consider a long-term career or location change.

As far as recognition is concerned, many others fell by the wayside. Thomas Longridge Gooch, for example, acted as Stephenson's principal draughtsman and amanuensis, converting the great man's ideas into working documents, all for scant recognition by posterity.

Doubtless much high-profile work was put out to tender, as with the Manchester warehouse, but probably not all. Much of the fine detail would fall to Gooch and It seems not unlikely that there were others working with him in the large office at Clayton Square. Casson in Great Newton Street was, like Sandars in nearby Pembroke Place, handily located for both Clayton Square and Crown Street. He may have opted out of his normal practice for short-term financial stability rather than recognition and career advancement.