On 4th July 1837 the Grand Junction Railway (GJR) commenced operations between [Liverpool Lime Street] and Birmingham Vauxhall and thus became the first UK trunk line. The following year the GJR would connect with the London & Birmingham and thus permit travel between Liverpool, Manchester and Euston. The GJR track in fact ran only as far as Warrington and the link to the lines of the Liverpool & Manchester Railway (L&MR) was provided by the Warrington & Newton Railway which was acquired by the GJR in 1835. 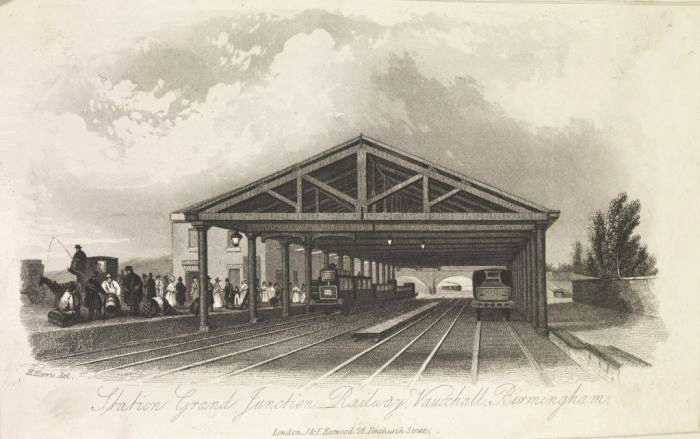 As reported by The Times, the opening attracted large crowds but was otherwise low key: no celebrities or bands and just a single flag on the first carriage leaving the temporary terminus at Birmingham Vauxhall station at 06:30. It was noted that there were no Birmingham men on the Board of Directors which was largely drawn from Liverpool.

The first class train comprised 8 carriages and the locomotive Wildfire. As was the custom, the carriages bore names: Triumph, Greyhound, Swallow, Liverpool & Birmingham mail, Celerity, Umpire, Statesman and Birmingham & Manchester mail. Once clear of Birmingham it averaged 35-40 mph. The train from Liverpool, however, suffered delays due to the "obstreperous intrusion" of people from the "iron and coal districts".

The first mixed class train from Liverpool, however, suffered an engine failure and the delay in its arrival at Birmingham led to much consternation amid speculation that there had been an accident.

In normal service the first class journey was expected to take 4 hours 35 minutes with second classs trains an hour slower.

Liverpool and the GJR 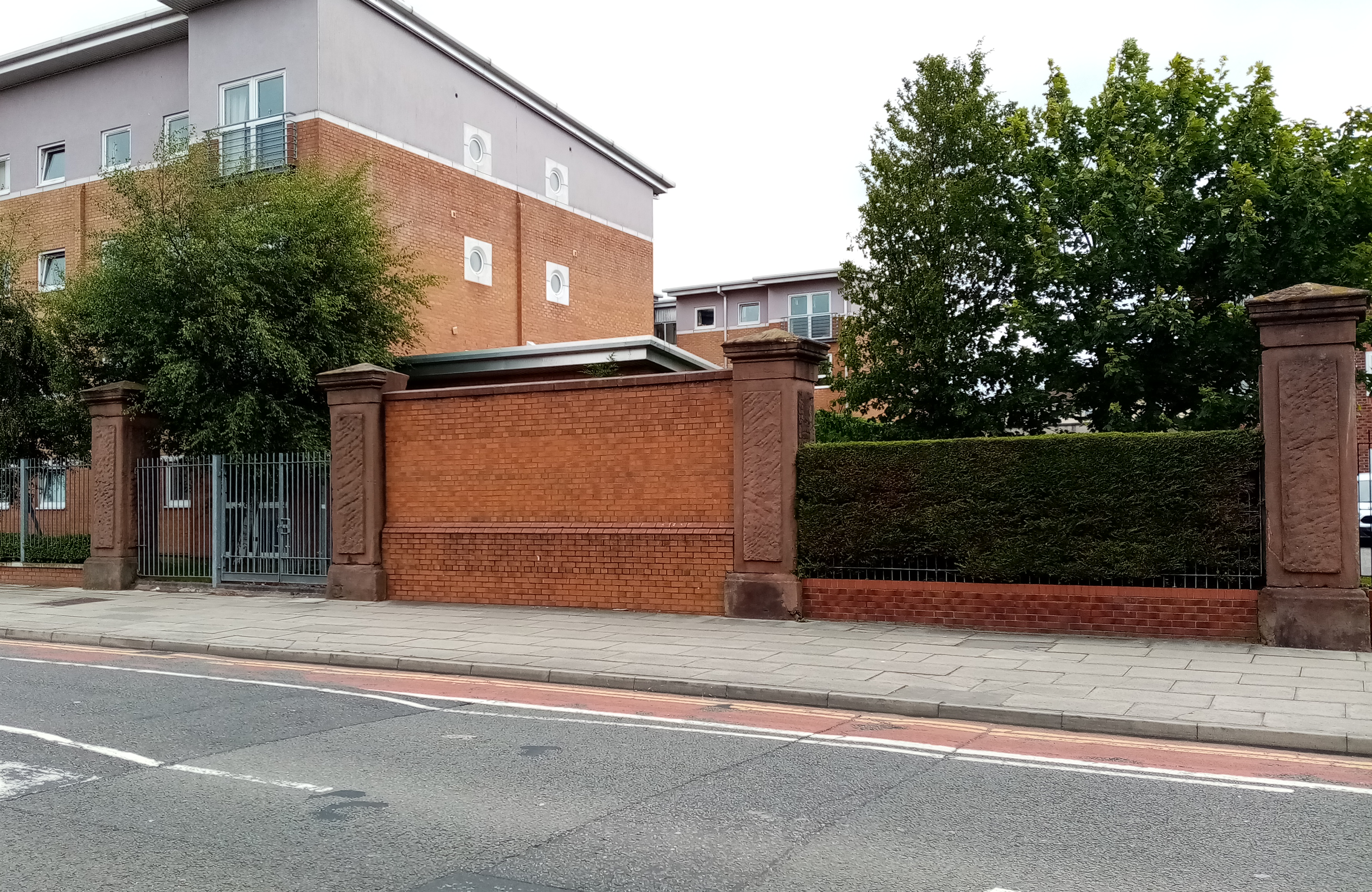 Fig: The lefthand pair of gateposts are situated on what was originally the boundary of the GJR yard on Crown Street. The offices of the Haydock colliery were located where the brick wall stands.

The interaction between the GJR and L&MR was more profound than the above suggests with the L&MR's John Moss its chairman and Charles Lawrence his deputy. The GJR was given space at Lime Street and had its own engineering works at Crown Street and shared use of the locomotive works at Edge Hill. While it operated luggage trains to Wapping and had warehouse and crane facilities there, it also had a yard at the junction of Kent Street and Grenville Street, the site now occupied by Liverpool Community College.

While the engineering works at Crown Street was moved to Crewe in 1843, the GJR continued to operate in close conjunction with the L&MR. For example, with the closure of passenger services at Crown Street the station appears to have been adapted to manage cattle and pigs with the GJR probably having its own loading wharf.

The close working relationship was underpinned by George Stephenson's involvement at different times as Prinicipal Engineer in both companies. The cross-representation of directors between the Boards was not always without concerns regarding conflicts of interest. However, during a period of mergers across the growing industry and network the L&MR was absorbed into the GJR in 1845 and both companies into the London & North Western the following year.

The earliest maps of Crown Street show two vacant fields north of the station with a footpath between them and the station leading from Crown Street to Smithdown Lane. The L&MR appears to have acquired the fields from the Marquis of Salisbury (the ropeworks on Smithdown Lane were presumably excluded and later became the site of the surviving Victorian terrace).

It seems likely that the expansion northwards took place incrementally. An undated sketch map at Lancashire Archives shows the proximal parcel assigned to Haydock colliery and the adjacent one only part-levelled and largely given over to sidings. It may be that this was the original location of the Hulton colliery parcel given the presence of a weighbridge. Hulton's operation may thus have moved further north when the enabling legislation for the GJR was passed in May 1833. 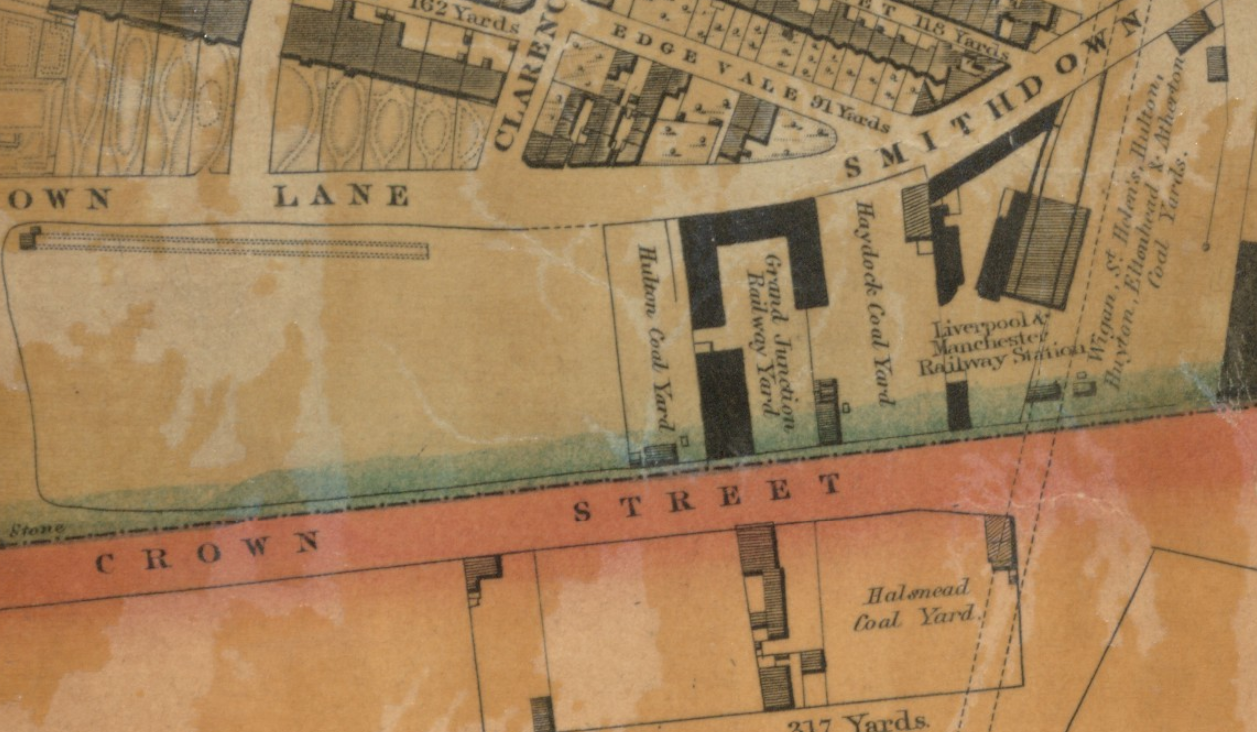 The GJR yard was an engineering works enagaged in manufacture and maintenance of rolling stock much as with Gray's yard on Crabtree Lane at the south end of Crown Street. It was here that Nathaniel Worsdell, formerly of the L&MR Crown Street works, built the first travelling post office, a modified horse-box, in 1838.

In 1843 this engineering activity moved to the new works at Crewe and the vacant GJR yard may have been leased to the adjacent Haydock collieries (later Turner & Evans and then Evans) before going through the hands of numerous coal merchants, including Laird's, Higginson's and latterly Martindale's, father and son.

After conversion to a coalyard the GJR yard was reconfigured with workshops to the east under Smithdown Lane being demolished to make way for sidings and an additional stable block being built along Crown Street. The large broad block on Crown Street, part-stables, part-stores with its own internal siding, seems, however, to have been retained. Plausibly the entrance pillars may date to this post-GJR as an attempt to unify the two yards although the GJR entrance was likely in the same location previously.

There is a photo of the Martindale's era that shows the company owning both the Evans/Haydock and the former GJR yards. The ex-GJR block can be seen to the rear and the windowless building to the left on Crown Street comprise additional stables. The building on the right contains the offices once belonging to the Haydock yard. The Martindale family was closely associated with Liverpool FC, two members becoming chairman of the club.

Ultimately the site became Oldham's scrap metal yard (founded in 1946 the company is now based in Kirkby and remains in the demolition and recycling business) before closing in 1972. A photo from this time shows the same office building with gateposts on either side and a large travelling crane over what had been the Haydock yard.

The Haydock yard also had stables at the south-east corner under Smithdown Lane and a covered wharf and siding adjacent to the passenger station. As with most yards, it had a weighbridge adjacent to the office.

A brief glimpse of the yard is available from a film demonstrating use of a petrol shunter at Crown Street in the 1930s. The introductory still shows from left to right the Haydock/Evans office, the later ex-GJR shed absent from Gage's map (the boundary between the two parcels was crooked), the broader ex-GJR block and, in the distance, the Hulton office/shed. 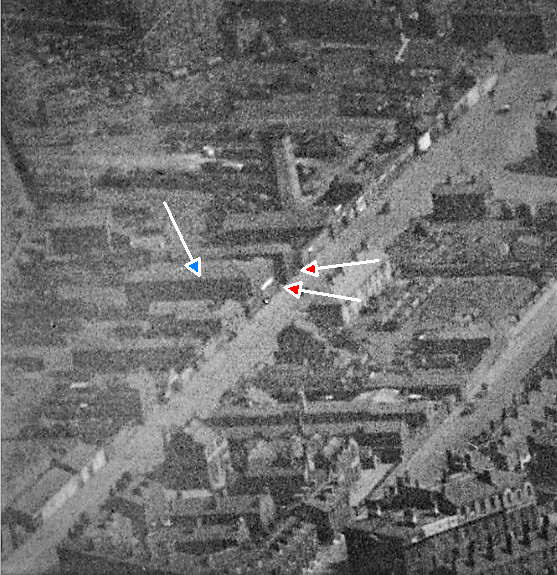 Fig: An aerial view of the location in 1934 shows the presence of the large GJR block (blue arrowhead) as well as the entrances flanked by the extant gateposts (red arrowheads).

Importance of the northern yard

There is always a tendency to focus on the L&MR passenger station at Crown Street but the GJR was also primarily a Liverpool endeavour with much in common and a longer reach. Even after the departure of the GJR works, the impact on the city of the northern coalyard was considerable. It provided the fuel for the dwellings and businesses that would soon populate the elevated outskirts of the growing town. Its success encouraged a similar development at Edge Hill.

Although the presence of the GJR was relatively fleeting, the persistence of the broad stables/stores block gives some indication as to the appearance of the contemporary buildings both at the far end of the GJR yard and, perhaps, the otherwise largely mysterious Millfield/Gray's works of the L&MR.

Thus the buildings are two storeys, brick-built with a low, hipped roof. There are no obvious skylights and access is via recessed doors, presumably to reduce risk in an environment with frequent movement of both road and rail vehicles.

Fig: Work-in-progress build of the reimagined northern yards based on Gage's 1836 map and showing the pillars at the entrances to the GJR and Haydock yards. The building in the foreground is the Railway Inn. The rolling stock is not intended to be representative.