I've been investigating nineteenth century Lawton Street and the Brougham Institute in particular. The various online street directories can tell us much about the life of a street in terms of who lived there and their occupation. However, insights into a street's appearance require matching street numbers to map location and layout plus such imagery as can be found. Horwood's map of 1803 and Goad's fire insurance maps of 1888 can be useful in places but Horwood's map lacks numbers for Lawton Street and detail on Goad's much later map masks much of the evolutionary development of Lawton Street with the street disrupted by the advent of Central Station. 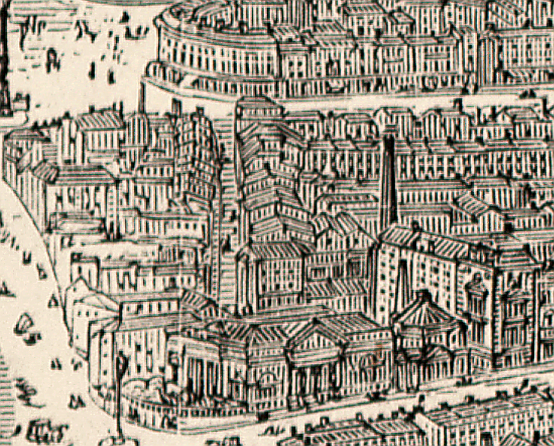 Fig: Lawton Street proceeds up to Renshaw Street to the left of centre on the 1865 panorama by Sulman & Jackson. CC-BY-SA 4.0 Historic Liverpool.

However, Goad's map also obscures the fact that street numbering changed mid-century. Initially it had proceeded up one side and then back down the other before changing to the more familiar odd numbers one side, evens the other. In Liverpool the impetus for renumbering came from the council Health Committee in 1852 and was a response to the rapid and relatively uncontrolled development of Liverpool. Whether it was motivated by the need to unambiguously identify properties in need of cleaning or improvement is unclear.

Renumbering was driven by Health Committee

The first step was for the Borough Engineer to develop and test plans for renumbering. The strategy is a little obscure but seems to have involved numbers of different colours depending on whether the new or old system was being followed (presumably buildings were labelled with both so old and new addresses alike could be used). Old numbers were in black, new ones in red. Letters a to c could also be used, presumably appended to numbers where a new build had been inserted and existing sequence was to be preserved. The Brougham Institute, for example, was numbered 6a.

Whether this proved necessary is unclear but numbering was eventually begun, probably in late 1855, and apparently completed in 1856. It was not without consequence. One workman carrying out the numbering was subject to criminal assault and another accused of the same, plus the renumbering caused extra work in terms of election admininstration. Overall the change must have been perceived as positive as Birkenhead then considered a similar updating.

Lawton Street was in the trial

One peculiar facet, however, is that Lawton Street may have been one of the streets included in the Borough Engineer's trial. The numbering in 1829 appears to run from the east side of the junction with Ranelagh Street up to Renshaw Street and then back down the opposite side to the west side of the Ranelagh Street junction, just behind the Waterloo Hotel. The buildings next to the hotel (and behind the Lyceum on Bold Street) were apparently warehouses but include one, possibly more, owned by drysalters Harrop, Hill & Smith who were probably making dye for paints, Smith operating the so-called Waterloo Mill as part of this process. Other likely anchor points include the residence of the Drummond family at number 31 and, between these, a building belonging to the Machell family who owned and operated the ropery from number 34 and may have had a chandlery there. 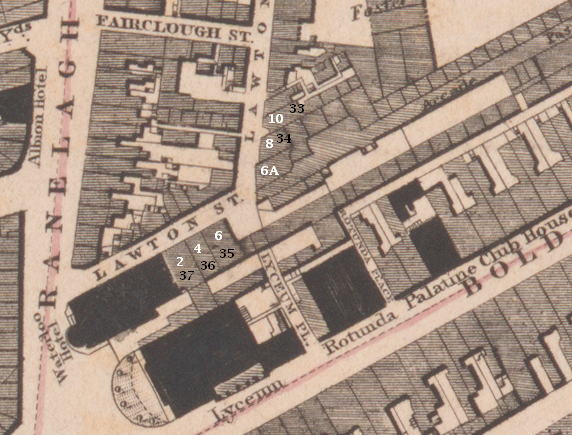 However, Gore's directory of 1853 (three years before the main renumbering) shows a reversal of numbers with the Drummonds (William now rather than John) at number 14, hotelier/publican Mary Williams at 10, provision merchant David Tomb at 8, Newton & Edwards (cement manufacturers) at 6 and auctioneer William Holbrook Jackson at 4.

A later sales advert suggests that Williams created her 13-bed hotel, the Crown, from two existing houses. In fact, Lawton Street had three, possibly four licensed premises, including the Dog, the Lord Hill and a spirit vault called the Cottage (perhaps in one of the original cottages on the street or in one of three behind the Crown). Its proximity to the large works of builders Foster & Stewart likely meant there was no shortage of custom and the size of the Crown made it a popular venue for meetings and function dinners. This was in stark contrast to the temperance ethos of the Brougham Institute at 6a which rather pointedly held an annual anniversary tea party and ball.

This numbering is consistent with Goad's 1888 fire insurance map which shows even numbers ascending towards Renshaw Street on the south side of what little remains of Lawton Street after the advent of the high-level Central Station in 1874 (work probably started in 1864).

All this is very tentative at the moment as regards Lawton Street and more research is required. However, knowledge that street numbering changed in general in 1855/6, and for some streets a few years earlier, may be useful to others.