The Huskisson memorial tablet at Parkside 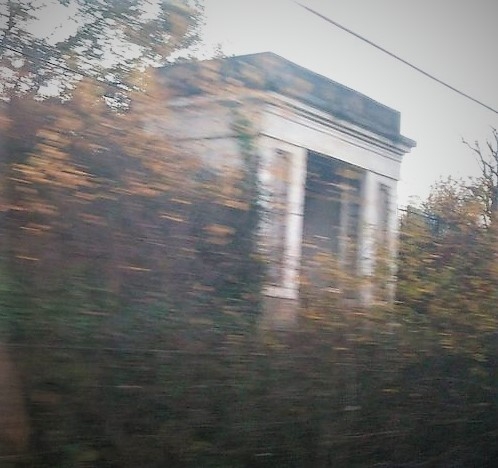 The Huskisson memorial at Parkside marks the scene of the fatal injury to Liverpool MP William Huskisson during the inaugural run of the Liverpool & Manchester Railway (L&MR) on 15th September 1830. It will be familiar to passengers on the Liverpool and Manchester line as a small building on the southern slope of the cutting just east of the A573 Parkside Road. Historic England describes it as grade II listed and as being in the form of a "simplified Classical temple" of painted stone. The date is given as 1831 but the story is probably a little more complex than this suggests. As ever, this is a working hypothesis, not a work of reference.

The memorial contains a tablet inscribed with a text of gravity and pathos appropriate to the time. The present tablet is a copy of one vandalised in 1990 and replaced in 2001. There is a second copy at Newton-le-Willows railway station (shown above) and the vandalised version, suitably restored, is now in the National Railway Museum at York. However, that is not the original tablet.

The original tablet was placed at Parkside in May 1831 but there is no mention of this in the standard texts although its presence is recorded without details in a memoir on Huskisson published in 1831. Given its location it was presumably a mark of respect paid by the railway company on behalf of its staff, directors and shareholders. Huskisson played a pivotal role in guiding the enabling legislation through Parliament which made his death on the opening day doubly tragic.

The author of the single, very long sentence on the tablet is unknown. A printed copy is among the papers of director Charles Lawrence relating to Huskisson and there may be further information in that archive.

However, this first tablet was destroyed in the winter of 1837/8 due to frost damage causing the bank to which it was fixed to press heavily against it. It would seem therefore that the tablet at that time was fixed directly to the rock of the embankment. The railway company funded a replacement in 1838. Roscoe's 1839 Book of the Grand Junction Railway mentions "a marble slab fixed in the wall at this station is the sad memorial of it".

Measom's 1859 Illustrated Guide to the Northwestern Railway mentions a monument to Huskisson at Parkside but gives no details.

We next hear of the tablet in a report dated September 14 1880 in the Manchester Guardian which describes the tablet as being "between two buttresses that support an iron water tank". This does not sound like a classical temple in miniature. Rather, the buttresses may have been the buildings housing the watering station, probably a boiler and an engine for pumping. Maps suggest the structure may have been largely intact in the 1880s but to have shrunk to something like its present dimensions by the 1920s. 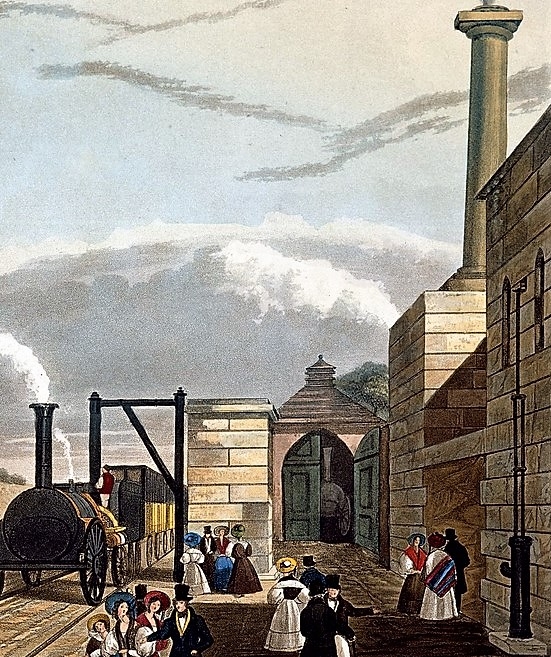 The structure features in two editions of a print by Thomas Talbot Bury that are distinguished by the presence of a chimney on the eastern block and a shed for a relief locomotive just beyond. In both editions the gap between the two end blocks (or buttresses) is mostly rock with just a single course of stone. Indeed, three people can be seen in front of the putative tablet location as if looking at it. An 1837 edition of a guidebook to the Grand Junction Railway (which ran from Birmingham and thence to Liverpool and Manchester on L&MR track) suggested that there was also a rail that pointed to the exact spot where the accident occurred.

The structure can also be seen under construction in a sketch by Isaac Shaw as well as in his print of a goods train. In the former case we can see a plausible water tank on the ground with probable stonework in place of much of Bury's rock (which might, however, be obscured). The print of the goods train shows the structure in an earlier guise without a chimney, the mid-region still largely masonry (but again part-obscured), and the water tank now raised into position.

It seems feasible therefore that the tablet was fixed first to the rock and then in 1838, slightly higher, to the masonry. The 7-month delay in mounting the tablet in the first place may then be ascribed to the construction of the watering station during 1831. The somewhat peculiar incorporation of the rock into the watering station may have been for reasons of economy. Alternatively, it may have been intended as part of the setting for the memorial tablet, possibly referencing the much cruder station of the tragic opening day. The use of stone facings (if such they were) seems to accord the watering station a higher status than might otherwise be merited although trains did, of course, pause here.

Intermediate watering stations became less of an issue as technology developed and for long distance routes water troughs were provided between the lines as at Eccles. The station itself closed to passengers in 1839 when a second station opened at a nearby junction with the Wigan branchline, the original facility continuing for some years as a goods station.

The only direct reference to the tablet from around this time comes in the LNWR guide of 1894 which briefly mentions that the MP was commemorated by "a tablet on an adjoining wall". 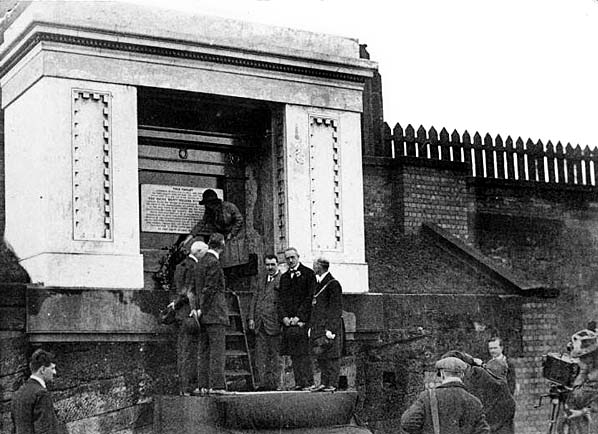 Fig: The newly unveiled monument in 1913?

There is no indication that the original tablet was situated in a small temple and when this was added is unclear although I suspect others will know. Wikipedia has a photograph (above) showing a ceremony in front of the structure substantially as we see it today. This may have marked a rebuilding around part or all the water tank given that the tablet is now fixed to a metallic surface in an appropriate position. Note the rock face still present at track level. The date for this new development can only be judged on the basis of the image labels, 1913 seeming not unlikely given the dress of those present at the ceremony and the photographic equipment to hand. Perhaps an additional incentive behind the redevelopment was the need to remove dilapidated and unsafe old buildings or to close the goods station.

As mentioned previously, the memorial briefly hit the headlines when the (second) tablet was vandalised. While it features occasionally on TV (recently, for example, on Dan Snow's railway history series), it seems to be very difficult to view except from a stationary train. 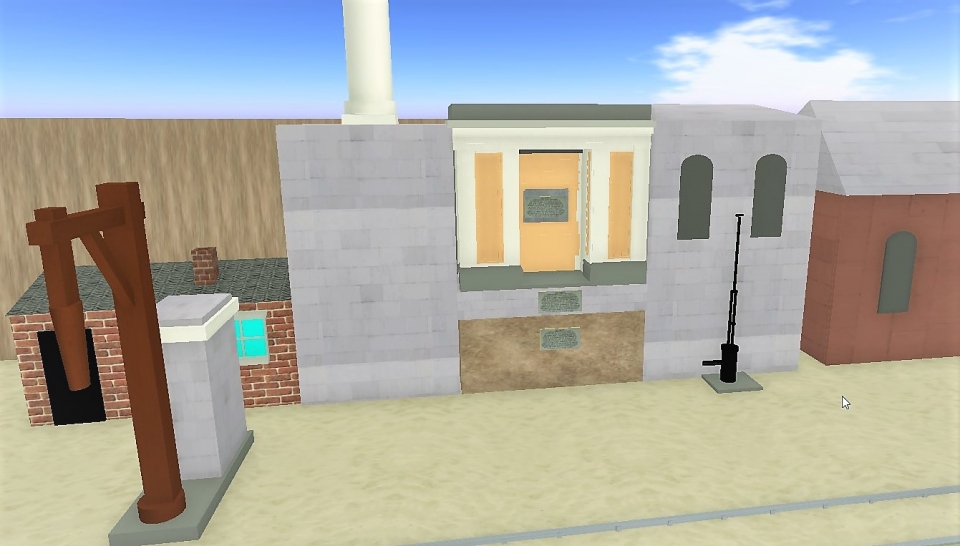 Fig: The three suggested locations for the tablet with the temple of 1913 added to the buildings of the 1880s and earlier.

In the 1880s it is possible that the buildings of the watering station were still present even if no longer used. Maps suggest that the engine shed formerly east of the watering station is now to the west with a possible goods shed occupying its original location. There is an additional building abutting the east flank of the boiler house, presumably the reason for the asymmetric nature of the low brick walls that encompass the contemporary memorial.

Huskisson's death cast a shadow over the opening day and understandably dominated coverage in the newspapers. Although permission was reluctantly granted to inter Huskisson's remains in Liverpool (his home was in Chichester), the mausoleum by John Foster Jnr in St James's Cemetery was not finished until 1834. While it doubtless contributed to the public subscription for the mausoleum, the company may have felt it was appropriate to make a gesture of its own in the meantime once the watering station was in place. The provenance of the miniature temple remains obscure and surprisingly unremarked given its more recent origin.