The other station at Liverpool Crown Street 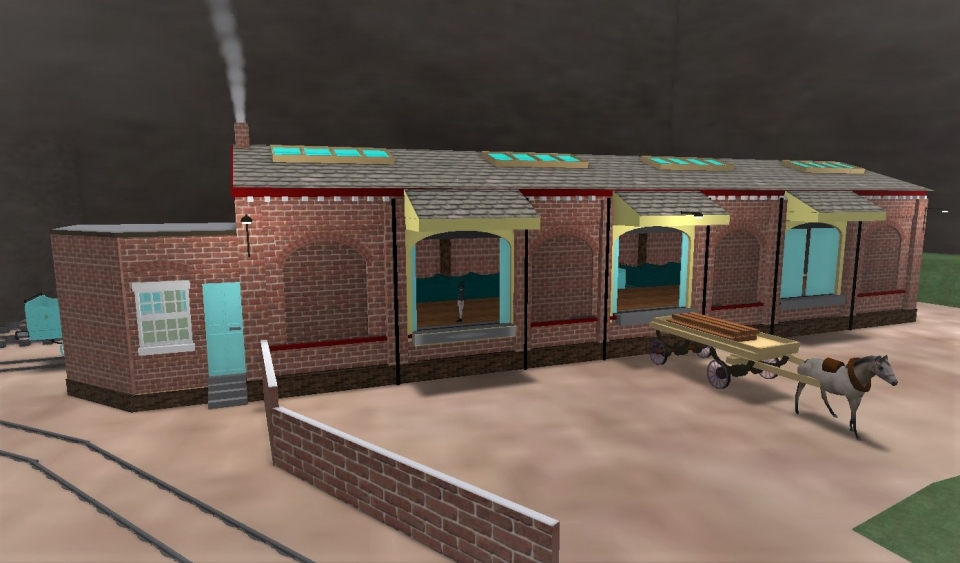 Fig: Liverpool Crown Street goods station as it may have looked in the late nineteenth century.

People who look at old maps of Liverpool are sometimes confused by the presence of a station east of Smithdown Lane. They think that this must be a remnant of the 1830 Crown Street passenger terminus of the Liverpool & Manchester Railway (L&MR). It isn't, it's the less famous but much longer lived goods station.

By the time the goods station was built, probably sometime 1843-6, the passenger station was already history. The goods station may have arisen from an attempt to boost freight traffic coming out of the economic depression in 1840-41. Donaghy (1972) also mentions enhanced competition with the canals for freight during this period. The L&MR appointed a special agent to encourage Manchester businesses to make more use of rail for freight. On the other hand the Crown Street station was small by comparison with the facilities at Wapping unless there were, as with coal, specific advantages in shipping to a relatively elevated location where carters had gravity to help them on their way. Providing a parcels service to residents local to the station, including shops and light industry, would be more in keeping with its size and increased economic activity in the neighbourhood.

What little we know of the early goods station comes via Braithwaite Poole, northern traffic manager of the LNWR (London & NorthWestern Railway) who first appears on the scene with the Grand Junction Railway (GJR) into which the L&MR merged in 1845. In that year Poole wrote a rule book for operation of the Liverpool goods services at Wapping, Edge Hill and Crown Street. It would appear from the guidance that the goods focus at Crown Street was on steam packet ships and sailing vessels, perhaps particularly bulky luggage and parcels beyond the remit of both Wapping and Lime Street (which was supposedly passengers only). Whatever the niche, the business does not appear to have thrived and Crown Street goods station became an empty package depot sometime before 1849 when Poole made a further pronouncement. Note that there is no mention in the rule book of a building, just a yard, although the existence of one does seem likely if only for security reasons.

In 1846 the GJR merged into the LNWR and a second (southern) tunnel to Crown Street was opened up from the Chatsworth Street (Wapping) cutting. This allowed locomotives to access Crown Street for the first time, the roof of the Stephenson tunnel being too low. Presumably part of the goods yard had already been levelled by this stage and was accessible from Crown Street via a tunnel under Smithdown Lane; ultimately there would be a total of four tunnels added, three of which are shown in Jackson and Sulman's panoramic view of 1865.

In 1849, Braithwaite Poole, now with the LNWR, wrote a report proposing a renewed focus on coal in Crown Street and Liverpool more generally; the empty package depot had been transferred to Liverpool Waterloo goods station by this time as most of the packages were due for return to Ireland or Scotland by ship. Apparently a difference in level with the adjacent coalyards precluded the yard's incorporation into mainstream coal activity (further excavation was considered too expensive). Instead, the Crown Street goods station was to specialise in potatoes. Whether the change took place is unclear as the company subsequently developed a separate agricultural depot for potato merchants at the northern end of its estate, possibly because the activity proved so popular. Coal, of course, became the mainstay of the remainder of the estate once the buildings of the old Millfield works were demolished.

In general the appearance of the goods station building can only be guessed at as no detailed plans or images are readily available. In some ways this seems surprising given that the building was demolished within living memory but this area was overshadowed in terms of heritage interest by the main Crown Street yards and, in particular, the Stephenson tunnel. The one image found to date shows the 1849 tunnel in the distance (this tunnel is still visible today) and the foreshortened northern and truncated western aspects of the goods station on the right. The goods station can also be glimpsed briefly (00:43) in a video of the excellent model of the yards in their latter years although little detail is evident apart from the gabled roof.

According to Minnis & Hickman (M&H; pdf), however, such buildings tended to be of a limited range of types and the Crown Street station appears to fit one of the types reasonably well. Thus it seems to have had a through track on the northern side with three loading bays at the rear under small canopies (at least from the 1860s) plus an external office (as shown in M&H Fig.21.c).

UPDATE (27/03/18): Although I have yet to view high resolution copies, there are two aerial images from the early 1970s that show the yard. One is rather distant but the other shows a little detail of the roof (the station as-was is bottom right and now accompanied by other buildings on the same parcel). It confirms that there are skylights but suggests four rather than three sets per side (presumably, and more logically, above areas not adjacent to the loading doors). There is a possible chimney at the junction of the two buildings as expected. The extension (see below) appears to be single storey and have a flat roof.

UPDATE (30/03/18): There is a much better aerial photo dating to 1922. It suggests that the individual canopies may differ from the style shown in the model, that the larger canopy was pitched and that the extension continued the main roof with a second gabled roof in parallel, both with single skylights and three windows on the south side. The office also has a pitched roof (mono or dual unclear) and the chimney is probably adjacent to the door with a window on the oblique wall.

The sequence of development

The first development in this location preceded the goods station, however. A short spur ran down beside Smithdown Lane and across the road junction with Falkner Street to what became Mersey Works, a granite and quartzite specialist. Hence, when it came to build the goods station a compromise had to be made because of this track, resulting in an obliquely truncated office. As this makes a pitched roof awkward, I have assumed the roof to be flat even though the main roof is monopitched.

There was about 1.5 miles of track over 6 acres at Crown Street in 1849, the layout was fairly complex and access to the goods station would have required a certain amount of shunting although the odd wagon could be accommodated by means of a series of turnplates allowing lateral movement across the tracks at the eastern end. This track extended beyond the building so direct transfer to a cart from a single wagon would also be possible.

By the 1890s, however, perhaps as turnplates fell out of favour, this facility had disappeared and the through track terminated in a buffer at the eastern end. Canopies were also added to the loading bays by this time.

In the early 1900s, the through track was removed and the internal platform likely extended over the space vacated with a narrow external platform now reaching out to the track beyond (a hybrid with M&H Fig.21.g). A much larger canopy covering two of the external loading doors was added together with an extension to the building at the eastern end to Overbury Street (the extra canopy did not last for very long). The extension is not obvious in the photograph suggesting it was probably single storey though it is perhaps suggestive of a dual purpose goods station and warehouse facility. M&H suggests that this type of arrangement typically had large sliding doors leading onto the platform. One door is evident on the photograph.

The goods station building may have fulfilled various roles over the years, including a return of the empty package depot in the 1890s, an affiliation with Warrington brewery Walker's in the early twentieth century and in the 1970s as a bottling store, probably for a nearby soft drinks manufacturer.

Further expansion may have been constrained by the presence of the track running to Mersey Works. When such traffic ceased (by the 1920s), additional buildings appeared to both east and west. However, by the 1980s the map shows the complex simply as "Works". Of course, some people may be familiar with the original building and it would be interesting to hear how much the actual structure diverged from that proposed here.

As ever, this is a scratch build, conjectural and a work-in-progress.

The distant photographic view of the goods station suggests that it had a monopitch roof, a rectangular opening for the through track (with a jack arch) and a single opening midway along the northern facade, at least in its later modified form. The jack arch suggests that the building might have followed the LNWR house style of the 1880s with arches forming a blind arcade on the north and south sides except where doors were present.

There are relatively few extant warehouses of comparable size and period in the north-west although Earlestown (Google Maps) has one from the turn of the century and some features (continuity of roof and canopy, skylights, flat roof to office) have been copied although some may, of course, have been later modifications. For comparison, the Crown Street building (less office and extension) was about 40x11 m while the Earlestown equivalent is slightly larger at about 45x17 m. The Earlestown office lacks an obvious chimney which may have been removed at the same time as its pitched roof. A chimney has been added at the interface of the office and main building in the Crown Street build inspired by the cutaway drawing in M&H (p.24). Presumably this would have provided a modicum of heat to the main building as well. According to M&H, LNWR was slow to standardise its house styles so the three louvred ventilation windows on the gable typical of later buildings have been omitted (they are also absent from the Earlestown structure). It would be unusual, however, not to have had some form of decorative brickwork on the gable ends.

It is a strange paradox that the goods station survived so long, over a century, when the passenger station lasted just six years. The latter, of course, was ultimately a victim of its own success while the goods station seems to have often been a building in search of a purpose. Its simplicity, and hence versatility, may have been a virtue in that regard.

Although some attention has been paid to other railway heritage assets on Merseyside, the goods station has understandably been neglected. Its loss, however, is regrettable given its age (built c.1846-9) as there appear to be no comparable LNWR buildings dating to that era. Of course, it would in any case have remained in the shadow of the large 1830 warehouse at Manchester Liverpool Road but its size and location might have been appropriate for a small railway heritage museum associated with Crown Street, the tunnels and the cutting (the same applies, of course, to Edge Hill station).

The site is now a children's playground within Crown Street park.